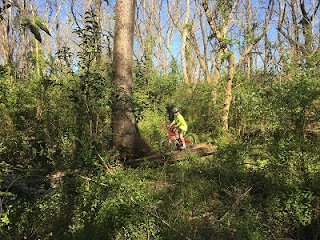 Until recently, Colonel Francis Beatty Park was our family's favorite mountain biking destination. Then we discovered the Back Yard Trail. This dynamic trail is hyper-challenging for avid riders, but also accessible for beginners. It has some fascinating features and fun roller coaster dips and turns. Set in dense wooded area, the natural surface trail is pleasant for hiking, too. 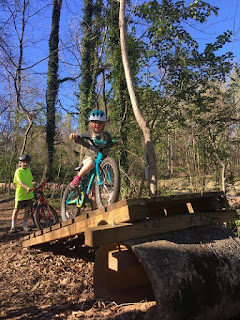 But before I go on, please note that this recommendation comes with a gentle warning: Proceed with caution. Parts of the trail are highly technical, which means there are obstacles and drops and jumps that are not suitable for many -- or most -- trail riders.
For your own safety, ride well within your limits (there are bypass options at every challenging point) and with the appropriate equipment (read: helmet!). For the safety of regular, advanced users, follow trail-riding etiquette, keep an ear out for approaching cyclists, and move swiftly aside when they come whirring by. 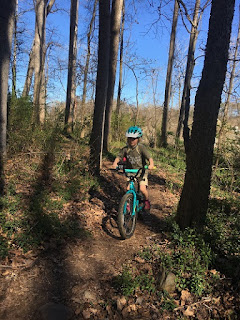 The 13-mile Back Yard Trail was blazed in 1987 by the Tarheel TrailBlazers mountain biking club. It snakes its way through and around wooded areas behind the waste water treatment plant at the intersection of Tyvola Rd. and Park Rd. 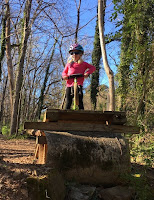 For a trail map and full turn-by-turn description of the entire route, visit MTB Project.
For a 5-mile option, I recommend the BYT Middle Third/Poo Tracks loop. Here's how to do it and what to expect: 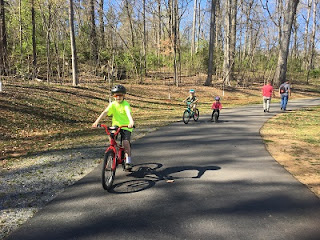 Start at the Little Sugar Creek Greenway parking lot on Tyvola Rd. located across the street from the Queens University Sports Complex (2229 Tyvola Rd., 28210). Follow the paved greenway down the hill towards the creek and keep right. 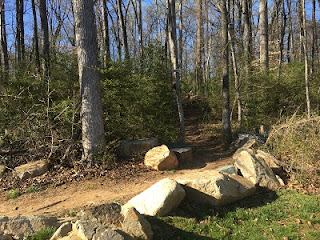 In 0.6 miles, the BYT Middle Third trailhead will be on your right. The entryway is lined with boulders and marked with several trail signs. 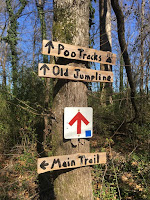 Hop on the trail and, at the first intersection, stay straight for the Poo Tracks/Old Jumpline trail (marked with signs). 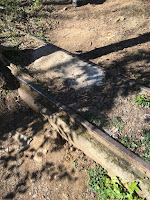 In about 0.75 miles, you'll come to an overgrown grid of 2-foot-wide "Poo Tracks," remnants of the wastewater treatment plat operations of yesteryear. The key to crossing these (as is the key to much of mountain biking) is keeping your momentum. But you can walk your bike along these if you're feeling a little shaky. 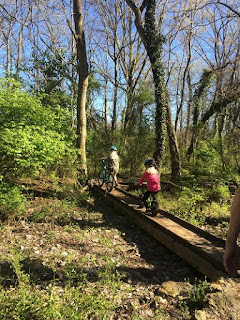 Over the course of several more miles, you'll encounter Concrete Hill (a climb up concrete slabs), a downhill jump line, berms and drops. Unless you really know what you're doing, steer clear of any features marked with black diamonds (simply walk your bike or take the trail shoulder). 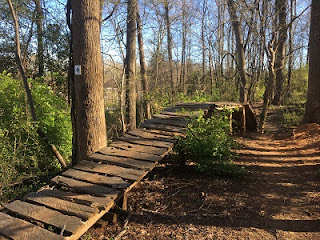 Between obstacles, the packed dirt trail rolls pleasantly through the shaded woods, occasionally over a scattering of rocks and roots.
Following the black arrows will guide you back to the trailhead. But if you want to bail early, there's an unofficial side trail to a service road that leads to the stretch of greenway you came in on (you'll cross the service road on your way to the trailhead). Much of the trail is within sight distance of the greenway so you're not likely to lose your bearings. 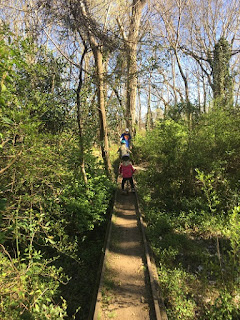 The Back Yard Trail offers a fun natural roller coaster experience if you want to shake up your bike riding routine. Again, though, it’s a fun walk in the woods if you’d just as soon go for a hike. Either way, be mindful of other trail users and know your limits. 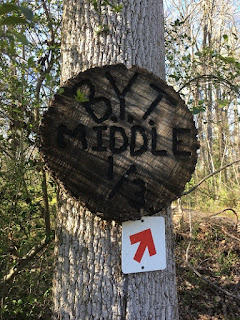 Happy adventuring.
Note: There are no restroom facilities along the trail so plan accordingly. Also, avoid the trail 24 hours after rain.
How to get there:
Park at the Little Sugar Creek Greenway parking lot on Tyvola Rd. located across the street from the Queens University Sports Complex (2229 Tyvola Rd., 28210). Follow the paved greenway down the hill towards the creek and keep right. In 0.6 miles, the BYT Middle Third trailhead will be on your right. The entryway is lined with boulders and marked with several trail signs.
Don't forget to pack: 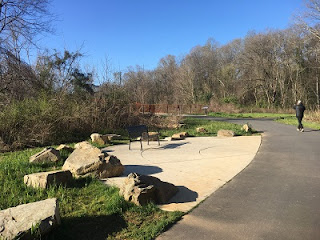 Good news, fellow Charlotteans! Did you know you can now take the Little Sugar Creek Greenway all the way from Tyvola Rd. to I-485? The city and county have been quietly chipping away at this stretch for the past several years. 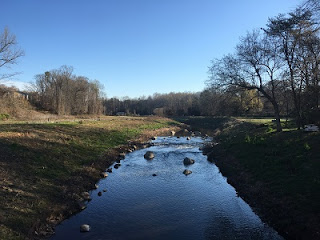 While the last, southern-most leg is nearing official completion, the trail has been cleared and is now accessible, either paved or graveled.


This means you can park at the shiny new parking lot on Tyvola Rd (directly across the street from the Queens University Sports Complex) and walk, jog, stroll or roll your way, traffic-free approximately six miles south along the banks of the newly and beautifully restored creek. 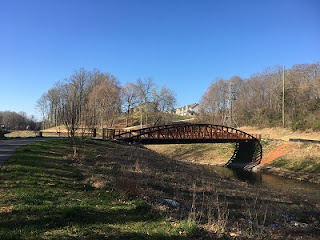 This trek will take you on a behind-the-scenes tour of the Charlotte water treatment plant campus, past Park Road Park, under Archdale Dr., over massive bridges, behind residential neighborhoods, under Sharon Rd. West, and by lots of native wildlife. Along the way, there are benches to pause for a break or a snack. 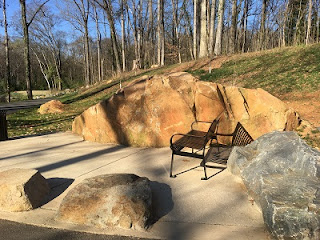 Eventually, this section of the greenway will join with others to form the 30-mile Cross Charlotte Trail, which will connect Cabarrus County to the South Carolina State line. I'm looking forward to that.


More immediately, I'll be thrilled when you can get from Park Road Shopping Center safely to Tyvola. It's coming! 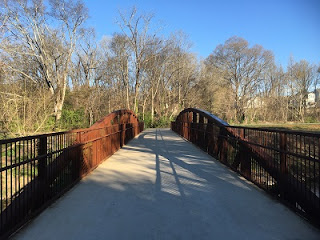 With the pleasant weather and bonus daylight hours, we find a greenway outing to be a perfect way to get some fresh air after dinner and on weekends when we can't get farther out of town. Consider checking out this section next time you want to stretch your legs.


Note: There are no restrooms along the greenway, so plan accordingly.

How to get there:
A large greenway parking area is located across from the Queens University Sports Complex, which is at 2229 Tyvola Rd. 28210. There's a newly installed stoplight at the intersection. You can also park approximately two miles south of Tyvola Rd. at the Huntingtowne Farms Park parking lot, located at 2203 Huntingtowne Farms Lane Charlotte, NC 28210.
Don't forget to pack:
at March 21, 2019 No comments: 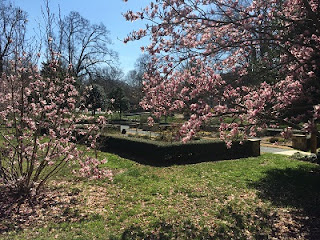 Here's a bit of trivia for you: Independence Park, situated in the Elizabeth neighborhood on the southeast edge of uptown, is the city's oldest public park. According to the Charlotte-Mecklenburg Historic Landmarks Commission, it was established in 1904 by Daniel Augutus Tompkins, founder of the Charlotte Observer, who argued that public parks are "a prudent and wise investment because they improve the moral and economic climates in cities." I have to agree.

The 19-acre Independence Park stretches from Charlottetowne Ave. down to Clement Ave. and is bisected by Hawthorne Ave. in between. It's one of our favorite "pocket parks." Here's why: 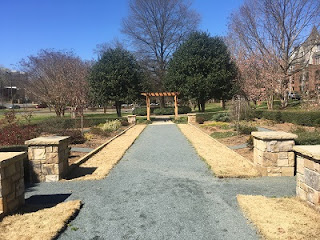 1. The rose garden: At the lower end of Independence Park (where Park Dr. meets Greenway Ave.), is a beautiful newly renovated garden that features a vintage stone seat wall, mixed plants and shrubs, a crushed stone path and rose beds. We like to get ice cream from the freezer chest at the Dollar General around the block (1949 E. Seventh St.) and enjoy a "dessert picnic" here. 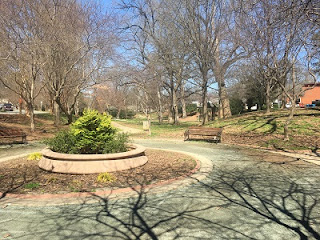 2. Paved trails: The park is just over a half mile from one end to the other. The paved footpaths are perfect for bikes, skates, scooters and strollers. Kids can run free in this relatively enclosed area. The one challenge for anything with wheels is crossing from the upper section of the park to the lower section at Hawthorne Ave. There are ramps, but you'll have to take a more roundabout route than if you walk up the stairs and cross at the crosswalk. 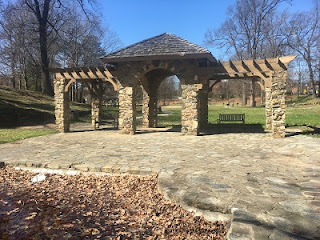 3. Picnic areas: Whether you spread a blanket on the grass or grab a picnic table at one of the half-dozen covered gazebos, there are plenty of pleasant places to eat. We like to get a take-out pizza from Hawthorne's Pizza (1701 E. Seventh St.) just across the street from the park and enjoy dinner al fresco. One of our favorite spots is by the reflecting pool at the edge of the park that borders Hawthorne Ave. Built in 1931, this beautiful stone feature is a memorial to 21-year-old camp counselor Lillian Arhelger, who fell to her death in an attempt to save a Charlotte Girl Scout from falling over the Glen Burnie Falls in Blowing Rock, NC. 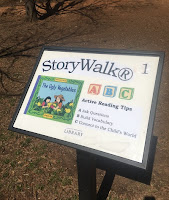 4. StoryWalk: Stroll and read. I just love this concept. Here's everything you need to know about StoryWalk. The latest book on display is "The Ugly Vegetables," by Grace Lin. 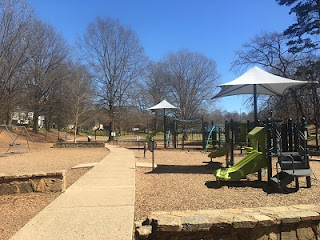 5. Amenities: In addition to the walking trails, there's a fantastic playground for little ones as well as a baseball field (with batting cage), basketball courts, tennis courts, a volleyball court, and table tennis. 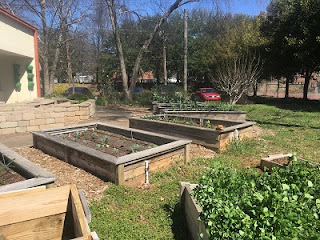 6. Demonstration garden: Located behind the 1940s-era cinder block Armory building beside the tennis courts, these raised-bed and in-ground gardens are maintained by Master Gardener volunteers to teach gardening skills to folks in the community. Herbs and vegetables grown here are given to Urban Ministry Center's Soup Kitchen. 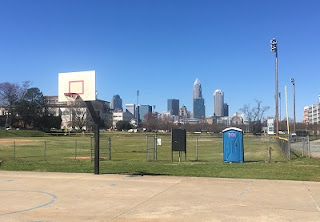 7. Skyline panorama: One of my favorite cityscapes in town. Memorial Stadium serves as the northern-most border of the park, which means no towering developments can obstruct the view. 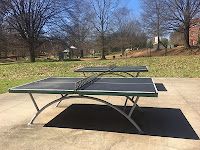 On a pretty day, any of the above is reason enough to visit Independence Park, and I hope you will. Plan ahead, though. For all its features, it does lack one major convenience: Restrooms.


How to get there:
Parking is available at 300 Hawthorne Ave., adjacent to Elizabeth Traditional Elementary School. There's also a small lot at the lower end of the park off of Park. Dr. between Lamar Ave. and Clement Ave. Here's a park map.