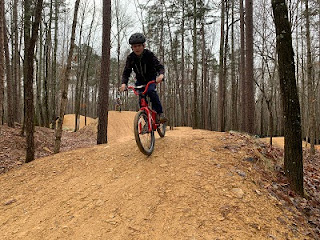 About a year ago, we discovered a new natural-surface pump track at Colonel Francis Beatty Park in Matthews. Imagine our delight when we went back a couple of weeks ago and found that the pump track, which was already very cool, has gotten a pretty epic makeover! 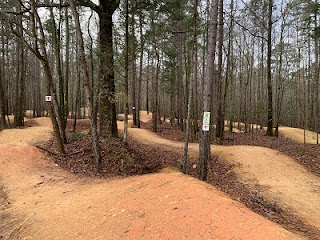 Named "The Colonel," the new and improved pump track, designed and built by Tarheel Trailblazers, offers about a quarter mile of bike riding fun. The name of the pump track is both a nod to the name of the park and a theme. There are three routes within the track, each of varying difficulty: Original Recipe, Extra Crispy, and Gravy. (Hello, KFC.) 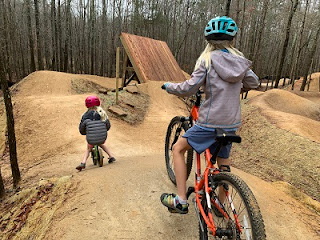 A pump track is a cross between an obstacle course and a roller coaster for bikes. They are called pump tracks because very skilled riders can "pump" their way around the course using momentum without peddling. But, they are every bit as much fun for even the most tentative riders among us. 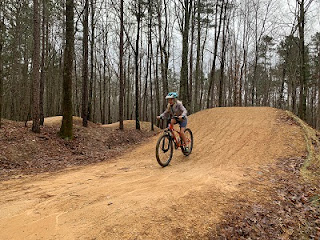 The easiest route consists of a series of rollers and berms. The more advanced routes throw in jumps and other technical features. Choose your experience carefully; it's all fun and games until you take a big spill. 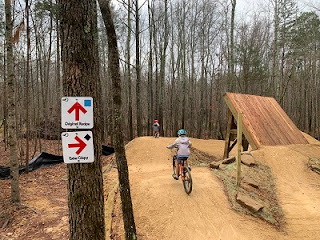 Helmets are a must. And the pump track is closed after rain. It's important to respect this rule; riding on a muddy surface can be dangerous and can damage the track. 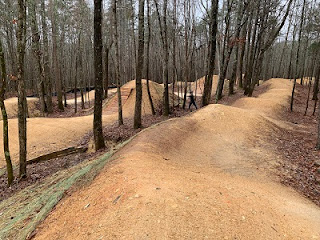 We visited one weekday morning not long ago and had the area to ourselves. I imagine it could get more crowded on a pretty weekend day. But even still, the space is large enough to comfortably accommodate a small crowd (remember to ride in the designated direction!). 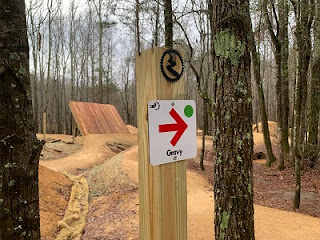 Colonel Francis Beatty Park is huge and has lots of amenities. You'll find the pump track next to the tennis court parking lot (take your first left after the entrance). Whether you're a biker or not, this park is a fun place to spend some time playing outdoors. And the pump track is an especially exciting feature for folks who like to ride.

How to get there:
Colonel Francis Beatty Park is located at 4330 Weddington Rd, Matthews, NC 28105. The pump track is located next to the tennis court parking lot.
at January 20, 2022