Down by the River: South Fork Trail 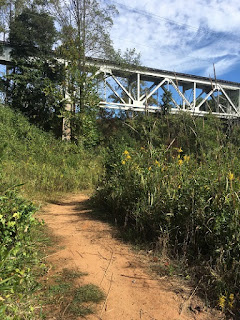 If you've been in Charlotte during the holidays, you've probably heard of McAdenville, otherwise known as Christmas Town, USA. For the month of December, the quintessential small town -- about 20 minutes down I-85 south from uptown Charlotte -- is wrapped and draped in millions of lights and Christmas decorations. For many folks, it's an annual holiday destination.

But I recently discovered a reason to visit McAdenville year-round. The South Fork Trail, part of the Carolina Thread Trail system, starts behind the McAdenville YMCA and hugs the bank of the South Fork of the Catawba River, connecting Christmas Town to the similarly quaint town of Lowell two miles away.

There are a number of things that make the South Fork Trail a compelling destination, including the trek under I-85 to start the hike. 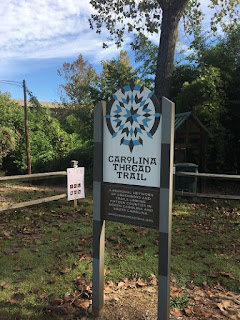 The out-and-back, natural-surface trail, good for both hiking and biking, was first used by Native Americans. Then, in the mid-1800s, two mills were built along the same path. One was Pinhook Mill, so called because mill workers used bent textile pins to fish for lunch out the building's windows.

During the Civil War, Pinhook Mill produced cloth for the Confederacy. When a group of Union soldiers was dispatched to burn down the mill, mill superintendent William Sahms ran out to meet the troops. When he discovered they were led by his childhood Pennsylvanian neighbor, Sahms convinced the soldiers to spare the mill. The soldiers burned the nearby bridge instead. The stone pillars of that bridge remain in the river today. 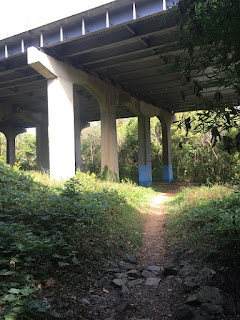 Leaving the trailhead, you'll immediately sneak under the highway overpassing the South Fork of the Catawba River, which you'll skirt for the duration of the hike. Next comes an impressive train trestle, also straddling the river. From then on, it doesn't take long for the den of the highway to fade, giving way to the sounds of songbirds, crickets, the breeze in the trees and your own footsteps pounding the trail.

The trail is marked at the 0.5, 1.0, and 1.5 mile points and ends near the cul-de-sac of a residential neighborhood.

The trail is also part of North Carolina Wildlife Federation's Butterfly Highway, a statewide network of native flowering plants meant to help restore native habitats to butterflies, bees, birds and other pollen- and nectar-dependent wildlife. The project is aimed at conserving and restoring areas impacted by urbanization and land-use change across North Carolina. 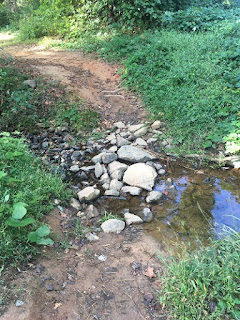 While the trail is relatively flat, it is prone to flooding during heavy rainfall, so use caution after storms and showers pass through. The trail is also relatively remote. For your safety, walk with a friend.

Bonus tip: After your hike, consider treating yourself to something sweet at The Cotton Candy Factory in nearby Belmont.

How to get there:
Parking for the South Fork Trail trailhead is at 119 Willow Dr., McAdenville, NC, 28101. The parking lot and trailhead are well marked. Of note, the trailhead is adjacent to the R.Y. McAden River Access if you're interested in doing some paddling along the South Fork River Blueway.