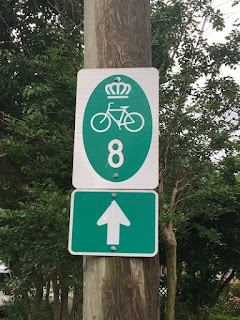 You drive by the signs every day. I'm sure of it. They are white, with a green oval. Inside the oval is an iconic Charlotte crown, a bike, and a number. They are everywhere, and, yet, somewhat invisible . . . until you notice them and learn their secrets.
For all its maddening traffic, Charlotte is actually remarkably bike-friendly. Case in point: Our greenways. And our protected bike lanes. And, importantly, the signed bike routes marked by the pervasive, yet mysterious green signs. 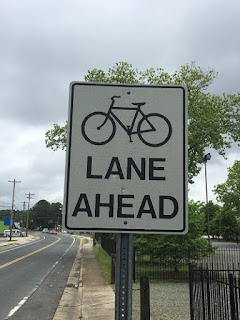 Years ago, Charlotte began identifying key bicycle routes to help cyclists identify a relatively safe way to ride bikes (on low-volume, low-speed city streets) to a variety of destinations, like schools, shopping areas, employment centers, transit connections, greenways and parks.
We're a bike-riding family, yet I'd never taken the time to learn anything about the routes. Until recently, when I finally asked a friend from our old riding days who works for the City if she could help me find a map or resource that would give me an idea of route directions and distances. 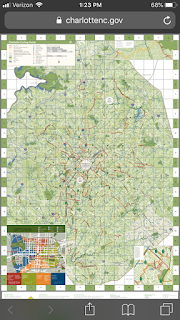 Here's the map she found for us, and I think its a game-changer. It's jam-packed with information, like color-coded bike lanes, bike routes, greenways and many other points of interest, which means it's easier to read on a device with a zoom function, rather than printed on paper.
Map in hand, I set out with our oldest kid to give one of the rides a go. And it was fun! We chose route No. 8 because of its proximity to home. From start (at Commonwealth and The Plaza) to finish (by the Evergreen Cemetery on Norland Rd.) it was three miles (one-way) and, true to the intention of route developers, the streets were relatively bike friendly (as, thankfully, were the drivers that afternoon). With a kid in tow, I don't mind riding on the sidewalk here and there, which we did on some of the narrower, busier stretches. But for the most part, we felt comfortable on the road. 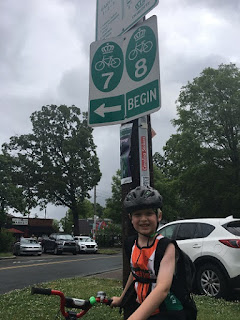 One of the fun things about the city bike routes is that riding them is like going on a scavenger hunt. While I do recommend getting a general sense of the directions before you mount your bike, there's something exciting about spotting the green directional signs as you go.
We chose to do an out-and-back ride, but I think next time we'll pick a destination and see if we can get there by piecing together stretches of multiple routes. Seems like a great, practical learning experience for the kids. 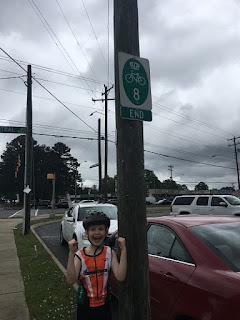 Now's a great time of year to dust off the old bike and go for a spin. Maybe start by planning an outing using the Charlotte Cycling Guide. And, when you're driving, I hope your heart leaps with a tiny bit of excitement every time you notice those once-invisible signs lurking everywhere you turn.